Now we know why nobody works in August, in the South of France.

Everything shuts down here for the month, or most of it. People told us we were lucky that our builders would work in August. But, looking back, it might be a case of “be careful what you wish for”… ! Hauling tiles and wood flooring up steps in the August sun, changing clothes three times a day because they’re soaked through after 15 minutes, and not sleeping at night, all make a naive Irish person realise why taking a few weeks off makes much more sense. Ah yeah, we should have known they had it sussed, the French.

Then, after two weeks of us and the builders using the toilet, the waste pipe – which had not been used in almost three years – backed up. Just before the August bank holiday weekend. Pas question of getting anyone out to look at it until the following week, bien sûr.

We were hovering on the edge of sanity already and that pushed us over. We had to get out of there.

We lashed our togs and our Italian phrasebook into the car and headed over the border to check out the Italian Riviera. (The Italian section was the original Riviera – from the Italian for ‘seashore’ – the term then expanded into France, from the Italian border as far as Cannes.)

After a four hour drive, we were at Cinque Terre, a series of five colourful villages perched on steep hillside above the sea, accessed by cliff-top walking paths, ferries and a train running through tunnels cut into the cliff. Even packed with tourists, it was spectacular and the food was amazing. 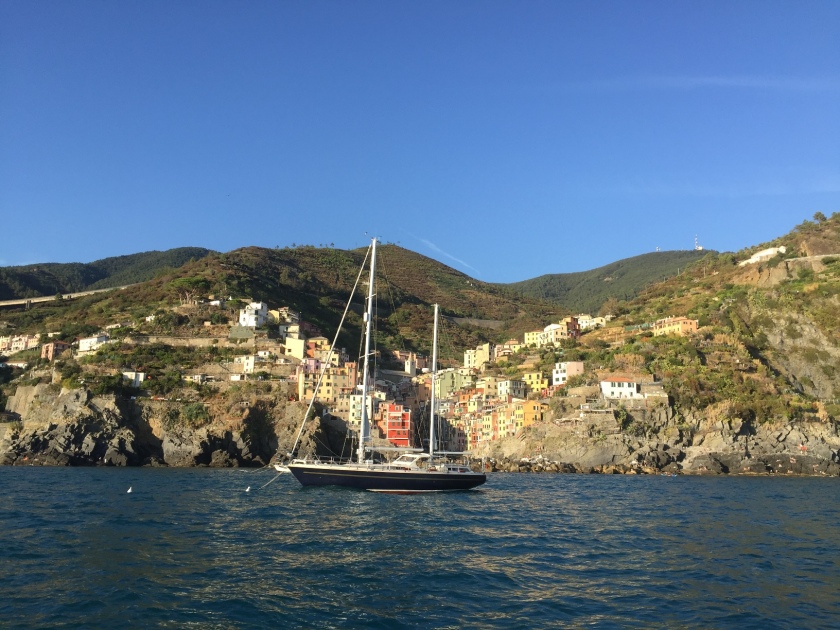 After three great days, we took the scenic coastal route back through San Remo, Menton, Monaco, Villefranche-sur-Mer and along the Nice Promenade. Next time we take that stunning coast road towards the border, we decided, it will be on bikes. A little spin across the border to have a cappuccino in Italy, perchè no?!

Back at home, the waste specialists finally arrived, with their high pressure hoses and their cameras. The diagnosis was that roots of one of the huge pines around the houses had broken into the waste pipe and were growing inside it, blocking it. The pipe had to be replaced. The garden wall and pillar had to be knocked down and reconstructed. The budget, already under strain, was going to take another knock.

But, meanwhile, the neighbours took us under their wings and invited us round for lots of apéritifs, which seemed to turn into dinners. We cleaned up and painted an outdoor terrace area, installed our fancy new barbecue, and had our first dinner in our new home. Andy discovered the Gorge du Loup on his bike. I discovered the excellent outdoor town swimming pool. The mysterious scaffolding came down from the square in the middle of the old walled town and we saw the pretty town hall, Hôtel de Ville, for the first time. We went in and registered our chambre d’hôtes. It’s really happening now!

Please get in touch if you would like to rent the entire villa on a self-catering basis during 2020. Sleeps 8/10 in 4 en-suite bedrooms + couch bed with own bathroom. €200/nt or €1150/wk +cleaning fee. Just contact us with any questions.

Measures in place to protect our guests:
– Keys, door and window handles, light switches, AC remote controls and other touchpoints are cleaned with alcohol regularly.
– Our bed linen and towels are washed at 60°C.
– Outdoor breakfast tables are 2m apart. Breakfasts will also be staggered to minimise contact with other guests.
– Check-in times will be agreed in advance with each arrival, to minimise contact with other guests. Appropriate distancing will be maintained.

To protect us, we ask our guests to please:
– Defer your booking should you develop any COVID19 symptoms, or come into contact with anyone with such symptoms, in the 14 days before your arrival.
– Maintain a distance of at least one metre with anyone you come across at Villa Rocamar; and cooperate with any other safety measures during your stay.