Seeing bathroom walls rise and doors appear each day in week three of the building has been a buzz.  We’ve been able to put en-suite bathrooms into all four bedrooms, which we weren’t sure we would be able to do – that was a bonus.

We’ve chosen our “local” beach – an important milestone! It’s a little sandy cove near the bridge marking the border between Villeneuve Loubet and Cagnes-sur-Mer. It’s unusual in that all the way along the coast – from Menton as far as Antibes – the beaches are stony. It’s also a good starting spot for long, flat runs in the evening, with options to run along the sea and footpath towards Nice Airport, around the Marina des Anges in the opposite direction, or inland on a wooded path along the river Loup.

We’ve started training for the Marathon du Médoc in September – a 42km tour of 20 of the best vineyards in Bordeaux with tastings along the route…. an important induction to French culture! The wine-drinking element of the training is going well, but we’re struggling with running in the intense heat, even in the evenings.

A day trip down to IKEA in Toulon (two hours’ drive down the A8 motorway down the coast) saw us drive back with a whole new kitchen packed into the car, the sunroof open so that the sink could fit in.

We got oak worktop nearer to home and decided to use it in the bathrooms as well, on top of the sink units, under the sinks themselves. It gave us a good excuse to take a stalk down to Super-Yacht Street in Antibes and pose as yacht owners, buying marine varnish. After detailed instructions from dad (a minimum of nine coats), a two-day varnishing workshop opened up in our kitchen. (We got to six coats.) 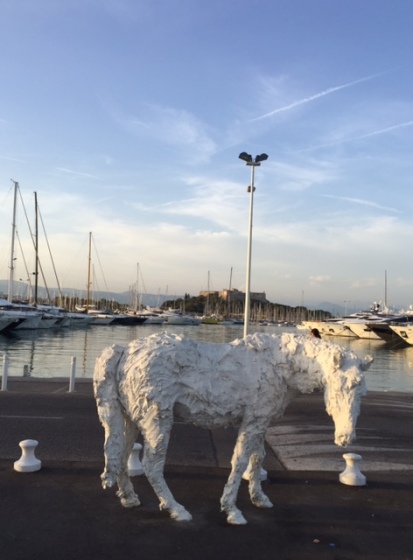 The seaside resort of Antibes – a pleasant day trip from Villa Rocamar, about 40 minutes by car 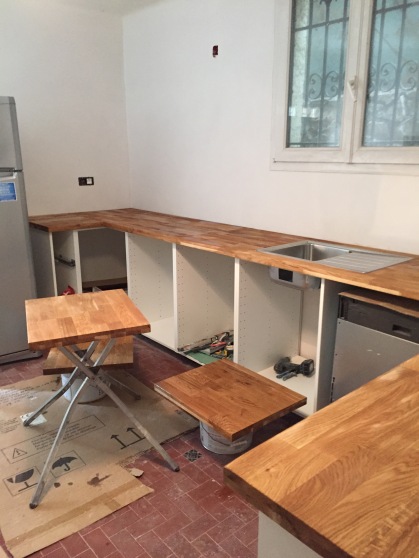 Then, all too soon, it was time to move out of our nice clean rental accommodation and into the building site.

When we made our plan, our schedule was to move over in March and do the renovations in April, May and June, to allow us to open up for the high season – July and August. This would also allow us to rent somewhere to live before the prices spiralled for the season. Months of administrative delays however, meant that we didn’t get to France until the start of June and the works only started mid-June. It would have pushed our budget out massively to rent in August, so we decided to bite the bullet and asked the builder to prioritise one room which we could sleep in and one bathroom, so we could move in to the house at the end of July, while the building work was on-going.

So the downstairs bathroom went in mid-July. A functioning toilet and shower on-site meant we could move in. 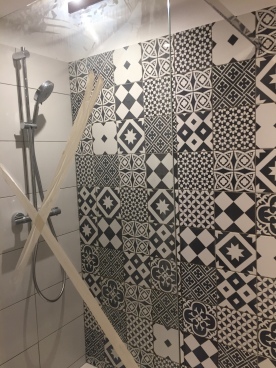 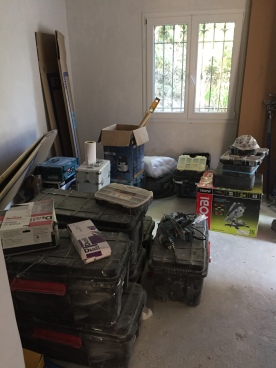 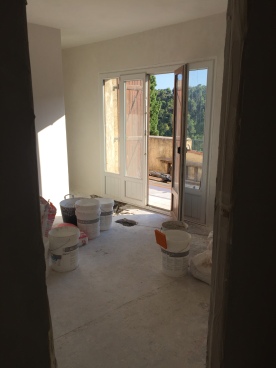 Except, only the toilet was actually functioning when we moved. The shower came three dirty days later, followed not-too-closely by the sink (all shared with the builders). Our bedroom was plastered and undercoated and, while there was no main light yet, two of the sockets were live, so we could use a standard lamp for lighting. We bought a lit coffre – bed with storage underneath – and everything we had with us was inside it, except the standard lamp and a cardboard box for a bedside locker. Two days in, in the middle of a heat-wave, we splashed out on a table fan to complete our sparse furnishings.

After a week of living in dirt and dust, with nowhere to put our clothes, we were wondering about the wisdom of our decision.

But not having any way to prepare food or anywhere to eat it gave us the opportunity to explore our new hometown and we’re pleased to report that our knowledge of the lanes, views and culinary establishments of Vence is now tip-top! 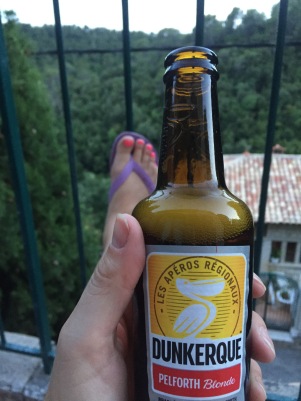 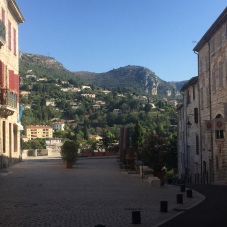 Place du Frene, with a magnificent view on Les Baous 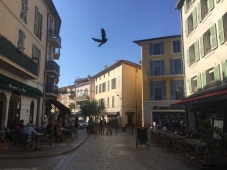 Cafe Matisse and Henry’s face each other on Avenue Marcellin Maurel, just outside the walls of the medieval city of Vence 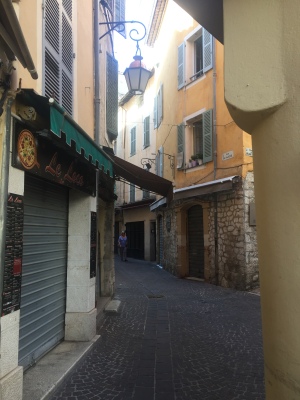 Please get in touch if you would like to rent the entire villa on a self-catering basis during 2022. Sleeps 8 in 4 en-suite bedrooms + couch bed. From €200/nt or €1150/wk +cleaning fee. Just contact us with any questions.

Measures in place to protect our guests:
– Keys, door and window handles, light switches, AC remote controls and other touchpoints are cleaned with alcohol regularly.
– Our bed linen and towels are washed at 60°C.
– Outdoor breakfast tables are 2m apart. Breakfasts will also be staggered to minimise contact with other guests.
– Check-in times will be agreed in advance with each arrival, to minimise contact with other guests. Appropriate distancing will be maintained.

To protect us, we ask our guests to please:
– Defer your booking should you develop any COVID19 symptoms, or come into contact with anyone with such symptoms, in the 14 days before your arrival.
– Maintain a distance of at least one metre with anyone you come across at Villa Rocamar; and cooperate with any other safety measures during your stay.